With the establishment of the Staatiliche Bauhaus in Weimar by Walter Gropius in 1919, it emerged as a new form of art school, not only in Germany but possibly the world. Former teaching traditions were abandoned and replaced with new concepts aiming to conceptualise the modern world born out of the harsh years of the First World War. The heart of the Bauhaus consisted of a combination of craftsmanship, art and engineering. This meant, students needed to be willing and able to work and craft interdisciplinary, which added to the revolutionary ideal of the school in general. Due to political issues the Staatliche Bauhaus moved to the city of Dessau in 1925, after they had granted the school full architectural liberty in designing their new schooling domicile. Out of this freedom arose the typical Bauhaus architecture. It incorporated radical functionality with simplistic design ideals and a desire to build a new living environment for the modern human being, where one can be rather than just exist.  Yes, one will stand in complete awe in front of the sharp-looking Bauhaus building in Dessau and wonder whether it is really as old as it’s documentation claims it to be. The same can be said for the so-called “Meisterhäuser”, built for the grand professors, such as Gropius himself, but also Paul Klee, Wassily Kandinsky, László Maholy-Nagy or Lyonel Feininger. Their exterior clean design with striking edges, simplistic colour palette and large windows alludes them to be contemporary and not close to 100 years old. Each building was to be understood as a testament to the rising of modernism, to the mechanisation of the human and the desire to physically encapsulate the inside with the outside world; hence blurring the lines and boundaries with large windows. 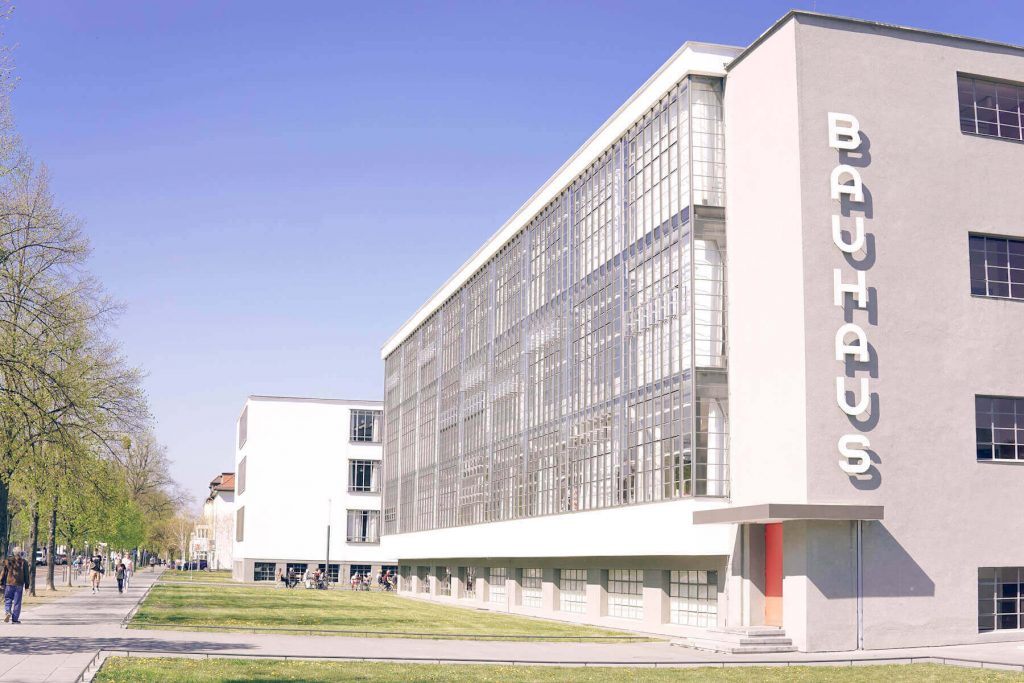 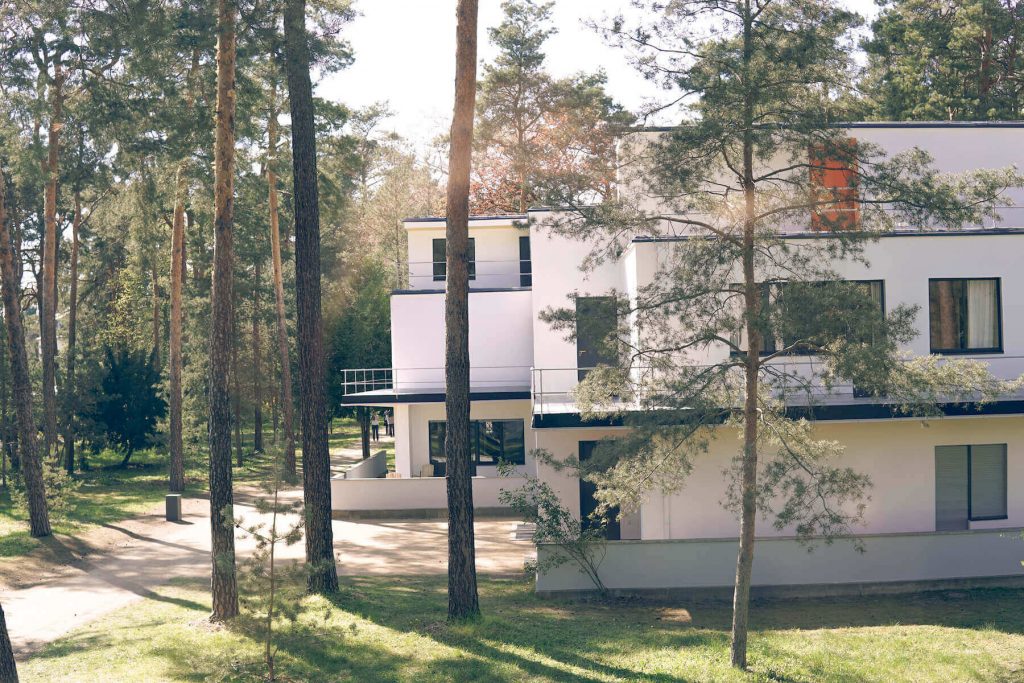 Architecture was to be understood as a “Gesamtkunstwerk” – as the merging of all art forms into one single substantial entity, and as the final production stage at the Bauhaus.

The rational need for fast, cheap and functional living spaces, in a society tarnished by war, enabled Bauhaus to expand their architectural ideas far and wide. Consisting of simple building blocks, arranged according to ones pleasure, Bauhaus gave society endless possibilities for new housing estates. This resulted in the absolute abandonment of ornaments, intricate designs and in the birth of a simple living situation in a society complicated by modernism. Despite various radical political parties disagreeing with the core concepts of the Bauhaus architecture, most of them did appreciate their radical functionality. This lead to numerous building sites across the globe from Tel Aviv to Chicago. Ultimately their radical functionality lead to a profound architectural reduction to the absolute necessary in the 1970s in Germany. Rectangular building blocks, known as “Plattenbau”, were arranged in such a way as to house the maximum number of people on the most minimal space available. While reducing architectural distractions to non-existence, as prescribed by the architectural modernism of Bauhaus, one might believe humanity to finally have found harmony within oneself and nature. Unfortunately this can only be deemed as the reduction of a noble idea to absolute absurdity. Not only did this sort of architecture diminish structural entities to near non-existance, but also sociocultural progress declined in aesthetic terms dramatically.

Gazing upon Bauhaus houses such as “Haus am Horn” (Weimar, 1923) or “Kornhaus” (Dessau, 1929), one would suspect them to be children of the 21st century, rather than founding fathers of architectural modernism. Their timeless character summarises all their aesthetic and functional qualities into attributes still sought out by contemporaries. The manner in which contemporary buildings are constructed has altered since the 1920s. Aesthetics and the need to bring the natural sphere into the home has not. Functionality and simplicity are still elements desirable in todays architecture, but functionality has been given a new understanding. From its original Bauhaus meaning only the function in its most simplistic form has been preserved, as structural space enabling living rather than existence. The physicality of functionality has first been reduced to its purest form in the 1970s and has now been expanded into limitless spaces, with purposefully deemed voids unfit for purposeful living, but adequate for aesthetic gazing. Bauhaus has given us a uniformity in architecture, rarely deviated from, and has also enabled creative freedom by liberating humanity from the unnecessary and only reduced it to the essentials. Whether one wants to align oneself with these values and receive them as blessings in a world moving faster and louder than ever before, or if one decides to reduce contemporary architecture to uninspired white cubes and as undeniable cursed grandchildren from the Bauhaus, will remain a personal quest of aesthetic principles.